Hillary Clinton and Barack Obama at the Democratic National Convention

While preparing for my recent NDC Sydney talk on real-time Twitter analysis, I was looking for interesting events to watch play out on Twitter. One great candidate was the 2016 Democratic National Convention, where Hillary Clinton accepted the nomination for president – the first woman in history to be nominated. There were a lot of major speeches from people such as Michelle Obama, former president Bill Clinton, Barack Obama and of course Hillary herself.

In a previous post I discussed the approach I used to identify the topics of Twitter discussion over time. Mapping them out into a histogram in real-time made for an interesting view of the event from the audience’s perspective.

Another view that can be taken using the same analysis approach is to plot key topics over time, to get an idea of the strength and duration of each topic’s impact. It’s interesting to see the topics that got the biggest response on Twitter during Hillary Clinton and Barack Obama’s convention speeches. 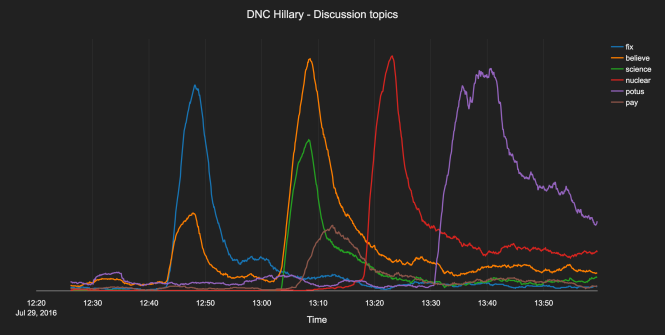 The three biggest topics on Twitter during Hillary’s speech were all at moments where she was trying to differentiate herself from Trump:

Compare this to “pay” near the bottom, around the time of 13:10. This is where Hillary talks about equal pay for women, and making corporations pay their fair share of tax. Some pretty emotive topics, but “pay” doesn’t come close to the other peaks on Twitter. Without getting into too much analysis, it’s easy to see that people were a lot less excited about making corporations pay more tax than they were for her other major points.

This is the kind of information analysts in the Democrats would be looking at to see what’s hitting home with their audience and supporters – and which points are missing the mark.

A mention from the president doesn’t hurt

What I think is really interesting is that last peak in the chart of Hillary’s speech, starting around 13:32. That’s a tweet from Barack Obama on the @POTUS account:

Great speech. She's tested. She's ready. She never quits. That's why Hillary should be our next @POTUS. (She'll get the Twitter handle, too)

The tweet had as much impact on Twitter as the major points in Hillary’s speech, even though it had only finished a few minutes ago. No doubt it was a planned move, but it shows how effective careful use of social media can be for politicians.

Looking at Obama’s speech the day before, there was one particular point that hit home much stronger than any other: 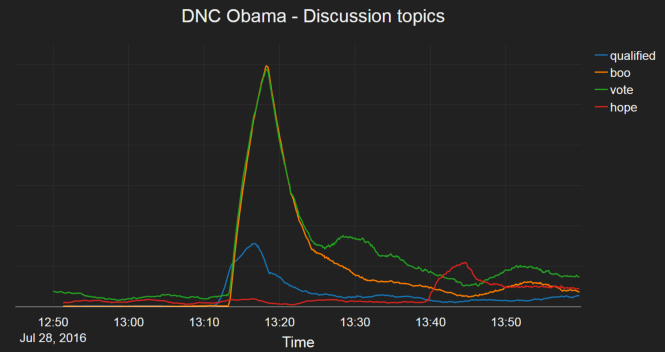 There was a moment where Obama mentioned Trump and the crowd broke into booing. Obama’s response was:

It’s a line he’s used before, and it’s incredibly effective – as you can see from the chart above. This had an impact many times bigger than his other major points, such as “hope” and how qualified for the job Hillary is. Across a speech that lasted almost an hour, this spike was unique.

It’s interesting in a country that has voluntary voting how valuable a three word quip like this could be. It’s important in these campaigns not just to win new supporters, but to motivate your existing supporter base to actually get out and vote. The residual mentions of “vote” long after the spike would no doubt have cheered on the analysts.

The power of data

This analysis is really only skin deep. There’s a lot more that could be done with other social networks, monitoring campaign rallies, and even digging into opponents’ and their supporters’ conversation.

I came across a great post from David Robinson analysing Trump’s tweets to identify which ones he writes himself, which ones his staff writes, and who’s writing the tweets with negative sentiment (it’s him).

With good data, the limit is mostly your imagination.

The value of real-time data

Producing this kind of information in real-time can be hugely valuable. The ability to watch the impact of a carefully planned convention as it unfolds, or monitor key campaign points during a live debate is powerful. I don’t know what the rules are for presidential debates in the US, but if the candidates had access to this information during the debates, it could give them a big advantage.

One thought on “Twitter Analysis: Hillary and Obama’s Convention Speeches”